Many people learn foreign languages ​​because they understand the important role they play in today’s world. Some study English, some French, some German … Some people like to learn rare languages, such as Latin, Sanskrit or Hebrew. The question is why they do it. A great German writer once said, “He who does not know a foreign language does not know his own.”

Those who study languages ​​understand that this makes them smarter, broadens their minds and provides them with a basic knowledge of language structure. Similarly, psychological studies have shown that people who learn foreign languages ​​usually have a better memory and do not suffer from Alzheimer’s disease or other forms of dementia. They become more observant and determined. And, needless to say, they have the best communication skills.

From a practical point of view, people learn foreign languages ​​to get a better job, emigrate, communicate with friends and relatives from other places, travel and study abroad, research and acquire more knowledge about other cultures.

If you know at least one foreign language, you can learn more about the customs and traditions of the countries where it is spoken. 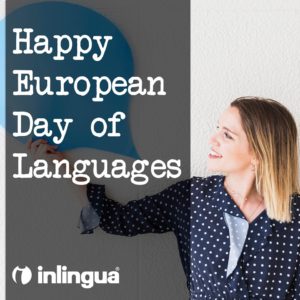 European Language Day was celebrated on 26 September and, as a school that teaches more than a dozen languages, we could not miss this anniversary. For this reason, we invited everyone to participate in our activities in the inlingua centers around Andorra. 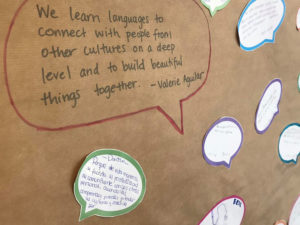 First, we asked our students to think of reasons why they need to study foreign languages ​​and write them on a poster we hung up on the wall. At the end of the week, we were pleasantly surprised to find the poster full of answers, and not all in English!

Secondly, every day of the week we invited students to use the inlingua Instagram frame, located in our different centers. The activity consisted of taking a picture inside the frame with speech bubbles in different languages ​​and a wide variety of flags. Those who took part entered the raffle for tickets for the first basketball game of the season, the result of a collaboration between inlingua and BC MoraBanc Andorra. And we drew a winner!

Today, people are learning English because it is the international language of commerce, travel, medicine, technology, and science. However, don’t forget that it is also worth exploring other languages. The more languages ​​you know, the more friends you will have around the world.

Learn languages! Come to inlingua! We are waiting for you!