The importance of language learning

Has language learning always been as important? Was it necessary to know languages ​​long ago? Is there a higher demand now compared to other times?

We invite you to walk through time, observing the different changes that the learning of a foreign language has had in our population. Interviewing three people from different backgrounds and generations will allow us to see how important this learning is and has been. 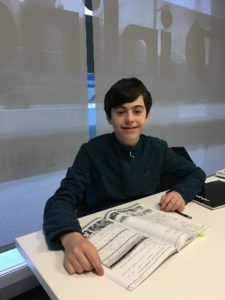 How important do you think language skills are today?

Language skills are important in order to travel, to work, for life in general really… if you are in a foreign country, you will need to meet with people and you will need to establish conversations with them. It is important to communicate with others.

Which of new languages ​​have you learned so far?

In your case, was it useful for you to learn Norwegian?

At my school we spoke French because it is the French School, but sometimes the kids didn’t speak French and they spoke Norwegian. As a result, I had to communicate with my friends in that language.

Which word or structure was the hardest to learn?

The hardest part was the vocabulary because there are so many words and they have no resemblance to those of the languages ​​I know. Also, in Norway I started learning English at the same time and it was very difficult for me to learn two different languages ​​at the same time. 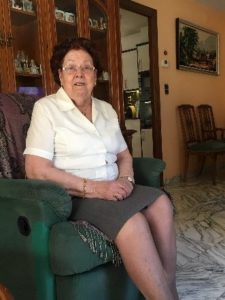 Other languages: French and Spanish

Was it important to know and learn languages ​​in your youth and adulthood? Why so?

As children, we were forced to learn Spanish. At the age of 13 or 14 they let us learn French, but I learned it orally and not with a teacher. In addition, I had a family in France, I went there often and so I also learned the language.

We arrived and I learned it orally. I went to live in France, I worked selling things in the market and had no choice but to learn it. I also really enjoy reading and I was able to learn French by reading as well.

I left for France at the age of 27 or 28 to work. I remember going to Perpignan to the market very early in the morning and it was very cold! I really enjoyed going to the market and doing different things. Today, I also like to sign up for different adventures!

It was important to know French because a lot of people were going to work in France. We were leaving because there was no work here and we had to support our families. There was a lot of work to do during the harvest. In the winter, however, it was harder to find work and you accepted whatever you could get. As we left, many of us walked to France to find a better future.

How many languages ​​have you learned throughout your life?

Apart from Catalan, I have also learned Spanish and French.

Has it been difficult? What language has been the most difficult for you to learn and why?

It didn’t take me long to learn French. I was very interested and eager to learn this language. That’s why it didn’t cost me that much. I always think that if I had had more luck and opportunities, I could have learned so many more languages.

I have instilled in my children the importance of learning languages, as it is very important for life.

Do you think it is important to learn languages ​​nowadays? Why?

It is the most important thing. People go out more: trips, studies … We didn’t travel before because there was no “cash”. Now a lot of people want to venture out and visit the world. Plus, you need languages ​​to work, of course.

Before, if you knew French, you had many advantages because it was the language that opened doors and job opportunities for you. That’s why it was taught so broadly. English is now one of the most important languages to acquire.

English, because it’s very important now. I would have liked to learn it because I wanted to learn languages ​​and learn more so I could say “Now I know one more thing”.

Other languages: Spanish, English and French

Was it important to know and learn languages ​​in your youth and adulthood?

At that time it was not as valued as much as it is today.

Because young people did not travel abroad in order to work as they do now, unless you were a bright person with an education and an wealthy background. The goal was different: people with an education stayed in the country to work and start a family. It may not have been as valuable to know languages, as there were not many foreign companies in the country that asked you to know so many languages. Plus, there wasn’t as much technology compared to today.

How many languages ​​have you learned throughout your lifetime?

As for English, I started different courses, but I didn’t finish any. I cannot remember why I didn’t finish them. The center where one studied did not offer a degree when one studied English. We only did one hour of class a week and you had to work from home with a VHS that contained the exercises.

Has it been difficult to learn languages? Which language has cost you the most and why?

English. I think because of the spelling of the words, the vocabulary and the way one speaks. However, when I studied  French, the words sunk in more easily. I think this is due to the fact that it is more similar to Spanish and Catalan. I saw English as a very different language. I find it harder to remember words in English. Maybe I should spend more time on it. I think the most important thing in English is to actively speak, I think this is the solution. I know people who have chosen methodologies with a lot of theory, but have no practice and are not able to achieve fluency in dialogue. I think if you don’t practice the conversation, it’s very difficult for you to develop the most productive part.

Do you think it is important to learn languages ​​nowadays? How come?

Without a doubt! Nowadays for any job, it is most certain that the employer will ask for languages. Not just English, Chinese is all the rage now. In short, learning languages can be a useful tool for yourself and for your future.

People are traveling more and more and to more distant countries. People today are not like they used to be, the world is more global and people are more willing to travel anywhere in the world to work.

Italian. I think it can surely be more attainable for me as it is a Romance language. Maybe it would be easier to learn and I could travel and communicate in that language.