April is an odd month which represents many things to many people.  In business, with its dry “business speak”, it’s the beginning of the year’s 2nd quarter.  In academics, it marks a halfway point where the clock counts down to the end of school and the beginning of summer time fun.  The “hump” day (or month as it where) – something that’s endured before the pleasant slide into the weekend, or in this case, summer.  For proud parents of a new-born baby daughter, it’s just a cool name.

However, for everyone in Northern Europe and vast sections of the North American continent, it has a more tangible meaning which impacts their everyday life.  April means unstable, dreary, often plain miserable, weather.  Why is that?  For that, let’s take a look at a little science and a little literature.  Let’s start with the latter first.

Most English speakers have heard the phrase “April showers bring May flowers”.  Where did that phrase come from?  Why is it even around?  Well, it has been around, in one form or another, for years.  Like hundreds of years.  It can be found in that classic of early English literature (and the bane of school kids everywhere) “The Canterbury Tales” by Geoffrey Chaucer.  Here’s Chaucer’s opinion of April:

“Whan that Aprill, with his shoures soote The droghte of March hath perced to the roote…” 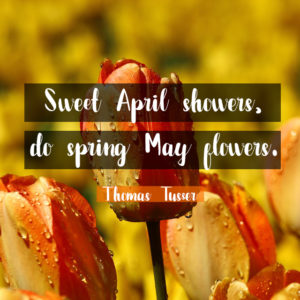 Now, if you didn’t understand any of that, you’re not alone.  Unless you were born in the 14th century or are a nerdy English teacher (like me) who knows Middle English, you fall into the 99.9% of the population that is completely baffled.  From Chaucer’s time, our little phrase appears in various writings off and on over the years up to the most commonly referenced version.  That would be a poem written in 1610 by Thomas Tusser, an English poet and farmer, which contained the line: 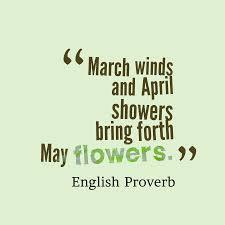 However, this was a little “wordier” than the one from 1610.  We English speakers like our proverbs shorter and even easier to memorize.  So, it was changed almost immediately to the phrase we know and love today (minus the March wind part):

O.K.  So, we know (kind of) the history of the phrase, but why would Chaucer and everyone who wrote this little line even bother?  What’s the point?  Here’s where the science comes in.

In various parts of the world, April has a bad (or good?) reputation as being one of the rainiest months of the year.  This is especially true in the United Kingdom and Ireland.  In late February/early March, the jet stream shifts its position northward.  This causes large masses of low pressure air to move across the North Atlantic and bring strong winds and rain across both the U.K. and the Emerald Isle.  Why wind and rain?  This is because the area covered by land begins to warm much faster than the ocean.  This creates a volatile mix of warm land, cold seas, and still cold atmosphere which, in turn, results in growing storming clouds.  And growing storm clouds have that habit of raining – a lot.  In fact, the weather can change hourly from springtime sunshine to winter sleet, snow, and blustery winds.

As this was the “weather world” of Chaucer and all the other influential English writers, the tendency was to write about what they experienced.  This weather pattern holds somewhat true in the parts of the North American continent which were inhabited in the 17th and 18th centuries by European settlers, who then also wrote about the terrible April weather.

This combination of science, which give us a lousy (slang English – don’t use it!) early spring with the promise of a more beautiful middle/late spring, and literature (i.e., people with plenty of time to write about the weather), is the source of our immortal little phrase.  Now, the true scientific fact is that air temperature has more to do with flowers blossoming than rain but let’s not let that little bit of knowledge ruin a good story…or proverb.

So, when the weather is dark, rainy, with a cold wind blowing in your face, just cheer up and remember the words and music of Hal David and Burt Bacharach from 50 years ago: 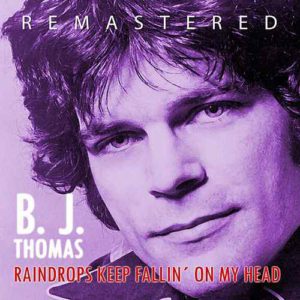 Raindrops keep falling on my head But that doesn’t mean my eyes will soon be turning red Crying’s not for me, ‘cause, I’m never gonna stop the rain by complaining

Because I’m free Nothing’s worrying me

If you don’t know this personal favorite of mine, check out the link below and enjoy: